Artistic cinema of a team of two – Maja Pietraszewska-Koper and Grzegorz Lipiec. The combination of their artistic visions, sensitivity and individual storytelling styles with images, music, graphics and animations gives a surprising effect. The creators confront the viewer with a great personality, one of the most outstanding Polish climbers, Krzysztof Wielicki, but they do it by revealing the backstage and watching the man of the mountains when he leaves them and returns home. #TO_BE is a philosophical story about friendship, partnership and nature, but also a breathtaking virtual trip to fourteen eight-thousanders – without pathos, with respect for people and nature. Watching the film, the viewer accompanies Wielicki in his ascent to the highest mountains in the world, but also goes to the garden with him to get vegetables. And she begins to wonder what is more important.

Adam Ondra is one of the best climbers today and a true virtuoso, who has tackled the world’s most difficult rocks and walls. A shy introvert-turned-famous-sports-icon, his desire to climb has changed into the obligation to win. As Adam prepares for sport climbing’s debut at the Olympics in Tokyo, we observe the influence of commercial pressure, mass media and the audience longing for a spectacle on both his personal life and the sport itself. In contrast with the loneliness that accompanies Adam during his everyday training and with the nature that surrounds him when he climbs on the rocks, he now finds himself at the biggest sport event in the world. Here, at the Olympics, the slogan “participation is more important than winning” has long been replaced by “the winner takes it all”. The many people who are part of Adam’s personal and professional world help him on his journey. But most importantly, there is his partner Iva, who is his biggest support. Herself a professional climber, she had to sacrifice a lot for Adam’s success, though. What is it like for her to live with a celebrity? ADAM ONDRA: PUSHING THE LIMITS is a breathtaking, intimate look into the life and career of a man who is one with his passion.

In the shadow of the majestic Matterhorn, two extraordinary figures from apparently distant worlds give rise to a memorable encounter based on their mutual passion for beauty and the mountains. The musician Mario Brunello and the climber Nives Meroi work together to complete an unusual feat: to bring one of the pearls of Bach’s music, the Sarabande from Suite no. 6, to the heart of the Alps.

The film will be presented by the director Gian Luca Rossi (Jury Member);

“Winter” is а Bulgarian freeride movie that touches the topic of the environmental problems of our time. In a snowless winter, a famous freeride skier from the recent past is caught by the gray routine life of the polluted city. Unexpected meeting with two kids on the street provoke him to discover his grandfather’s old family albums, which captured the snowy winters of the past. Absorbed by the photos, the young man is carried away to the world of the winter mountains. Is the the winter lost forever? Locations: Pirin mountains, Rila mountains, Rhodope mountains, Balkan mountains, Vitosha mountain Cast: Simeon Pavlov, Valeri Peltekov, Ivaylo Ermenkov, Tony Cheresharov, Daniel Uzunov, Ivan Troyanov.

Q&A – The film will be presented by the director Viktor Troyanov.

When is it right to follow your dreams? Let’s take the lead of international mountain guide, humanitarian, and 2016 National Geographic’s People’s Choice Adventurer of the Year, Pasang Lhamu Sherpa Akita, as she questions, then follows her intuition on the most important expedition of all – her own life. Dream Mountain offers insights into her struggle to balance mountaineering with motherhood, and the pressures of respecting her traditional culture while pushing boundaries as an elite female athlete.

The project was carried out by:
The Italian Cultural Institute – Sofia together with the Association Ragni of Lecco
in collaboration with:
the alpinists Nikolay Petkov and Ivo Ninov
We would like to thank for the support:
Nikolay Nenchev – The Director of The Vratsa Balkan Nature Reserve
Emil Ivanov – The Mayor of Svoge
Plamen Grigorov – The Village Chief of Gubislav
A film by Michele Caminati

Q&A – The film will be presented by the climbers Nikolay Petkov and Ivo Ninov.

In 1984, Zoltán Demján summited two eight-thousanders without supplementary oxygen. First, he climbed the south face of Lhotse Shar, then the south pillar of Mount Everest. However, the weather turned his descent into a drama. His life lesson happens during his first ascent of Dhaulagiri in the Alpine style. On this vertical southwest pillar not only the highest difficulty of climbing awaits him, but also important knowledge that will change his life.

Facing some of the most challenging terrain in the world, Valentine Fabre and Hillary Gerardi, two world class athletes, attempt to be the first women to ski the Haute Route non-stop from Chamonix to Zermatt. For Valentine, the Haute Route has deep personal resonance. Her husband had set the men’s record shortly before a fatal mountain climbing accident a decade ago. For Valentine, completing the route is the ultimate tribute to his memory. When Valentine met Hillary, she found a capable partner for this arduous and emotional journey. Despite being relatively new to ski mountaineering, Hillary has vast reserves of stamina that carry over from her career as a professional mountain runner. Together they set out on this non-stop 100km traverse, climbing 8000m over some the most beautiful high mountain terrain in the world. Will their months of training prove to be enough for these women to establish the record?

A Northwestern Argentinian teacher leads a mobile cinema crew to the most isolated school in the Jujuy high-altitude valleys, undergoing a 20-hour journey on foot in adverse conditions. Their arrival involves us in the high-altitude educational values, portraying the isolation in the Andean worlds and how communities engage with the earth. “The Andean Screen” is a poetic analogy between cinema and travel; a choral history spun by Silvina Velázquez, principal of the school, whose tenacity introduces a new paradigm for the women of the valleys.

A young shaman must face her first test—a trip underground to visit Kannaaluk, The One Below, who holds the answers to why a community member has become ill. Facing dark spirits and physical challenges, she must trust her mentor’s teachings and learn to control her fear.

Film about a story from the sea to the summit. The adventure starts in Asturias (north of spain) and reaches the summit of Naranjo de Bulnes a climbing summit at 2500.. all this in 10h . Cycling ,running and climbing.

Q&A The film will be presented by the protagonist Natalia Mastrota.

Godspeed, Los Polacos! tells the story of five university students on the edge of adulthood who skillfully pull the strings of the Soviet system, and find themselves on a kayaking expedition in the Americas with a six-wheeled military truck, homemade equipment, and little to no whitewater skills. The story follows their epic two-year journey that culminates in the record-breaking first descent of the world’s deepest canyon, and finds the kayakers in Soviet cross-hairs after they leverage their new found fame to fight for democracy in the Eastern Bloc.

n a dramatic attempt to bring awareness to the changing continent, an international expedition led by renowned explorer Will Steger embarked on the first-ever coast-to-coast expedition across Antarctica in 1989. Six explorers and their sled dogs braved howling storms, sub-zero temperatures, snow crevasses, and other perils as they traversed the icy terrain. Now, thirty years since his groundbreaking expedition, Steger heads out on the ice once again – this time to the opposite end of the planet. Deftly weaving his contemporary journey with rare, dynamic footage of his original treacherous seven-month odyssey, After Antarctica is an urgent message spanning both poles.

Festival Party Night – 22:45h, hotel Gardenia – Acoustic concert of Stefan Valdobrev and presentation of his book. Dances until the morning! 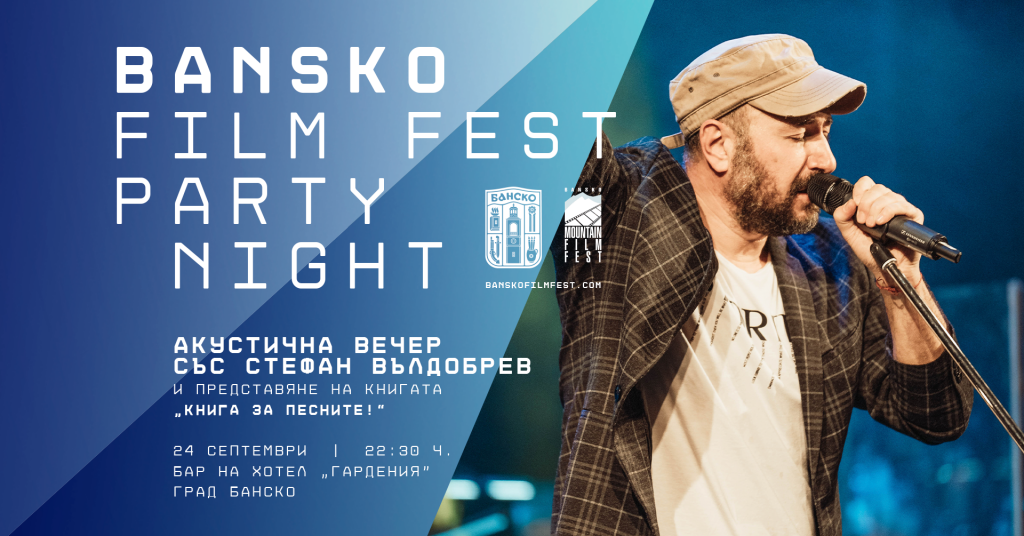